Like many great businesses, the flower delivery company Grown|Gathered started as a hobby. But not the hobby you might expect.

Grown|Gathered founder Caroline Lowery ’16 says it all started not with gardening, but with beekeeping.

“In high school, I became obsessed with bees,” she says. “I learned everything I could about them. That gave me exposure to horticulture, including how bees fit into the flower world and what flowers bees like.”

So then she started learning about flowers. And wondering.

“When it comes to cut flowers, there’s a lot more to it than what you see in stores,” Caroline explains. She wanted to know how the industry works. But she didn’t prioritize pursuing that interest. At least, not at first. After all, she had a career to build.

After graduating from UNC, Caroline moved to Seattle for a job in investment banking. Turns out, the Seattle area is home to a number of well-known flower farms.

One day on her lunch break, Caroline wandered into a bookstore and picked up a book about a flower farm an hour and a half outside of Seattle—a book written by the farmer herself.

“I thought, I would love to have her flowers and know that I have her flowers, to know her story and to enjoy her flowers knowing her whole background,” Caroline says. She wondered, is anyone providing that kind of learning experience, that personal connection, for consumers who love flowers?

“No one was doing that,” she realized.

“There’s so much of that in food right now. You can go to the farmers market and learn all about this specific variety of tomatoes. You can join a grandma garden club, but it’s not specific to cut flowers.”

Caroline envisioned an affordable subscription-based delivery service for locally grown flowers. But it wouldn’t just deliver the flowers—it would also share the story behind the flowers.

“There are so many inefficiencies in the traditional florist model, that make flowers a luxury good,” Caroline says. “What if I could combine this idea for making flowers more locally minded, more farmer forward, more flower forward, and design it to make it more affordable?”

In Caroline’s job at Cascadia Capital, she helped fund a lot of family-owned and founder-owned companies. That gave her confidence in her own idea.

“I saw a lot of people who had an idea for dog treats or kombucha or something like that, and just kind of did it,” she says. “All of these people just had an idea and jumped in and did it.”

Plus, Caroline already knew a little bit about flowers, from her days as a beekeeper.

So at the start of June 2018, Caroline left Cascadia to work full-time on her company, which she named Grown|Gathered. She says the first few months have been a whirlwind of design and logistical challenges.

For starters, Grown|Gathered delivers its flowers “like a newspaper, super early in the morning,” Caroline says. “Before 7am, your flowers are on your doorstep.”

That way, Caroline can avoid traffic on her deliveries, and her customers can bring their flowers inside before they leave for work. Caroline sends a text message notifying each customer when their flowers have arrived.

Convenience is a major selling point for Grown|Gathered, but it’s not the only one.

“We design the whole model around affordability,” she says. A subscription to Grown|Gathered costs only $20 per delivery, for a beautifully arranged bouquet. 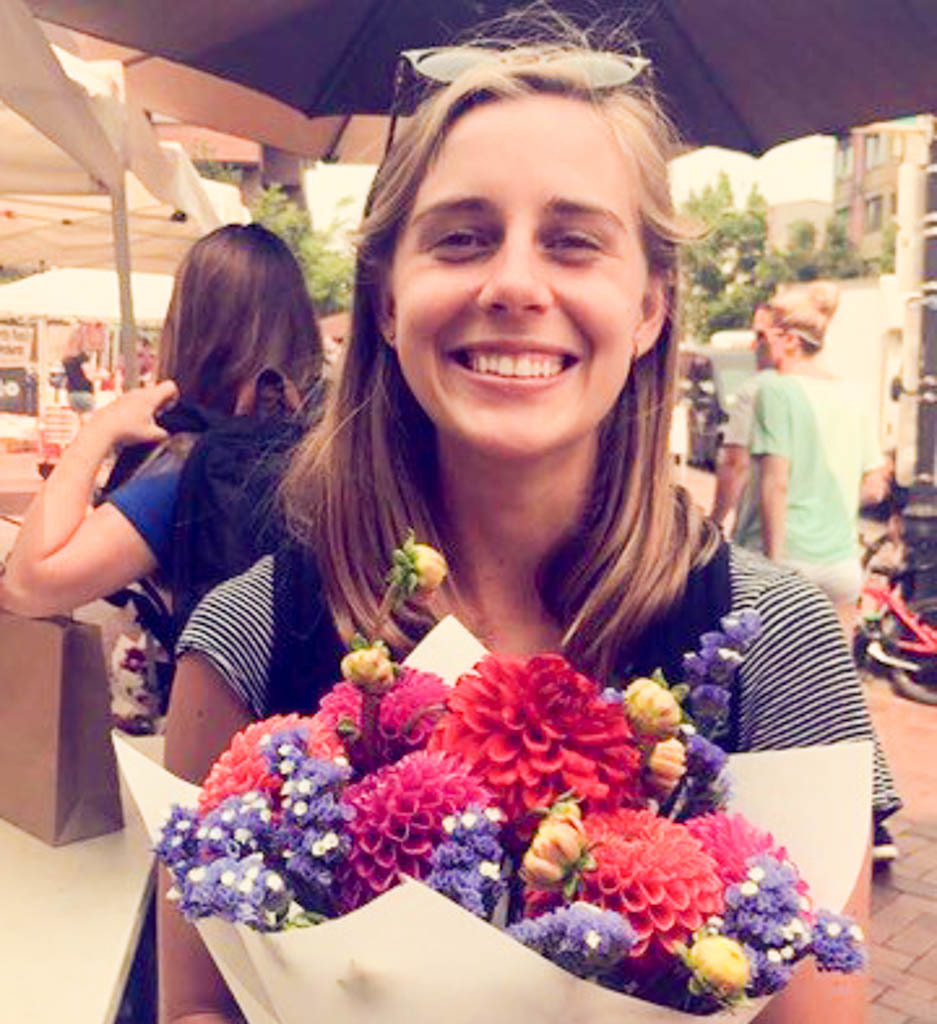 As of August, Caroline has a full-time business partner—a former coworker from Cascadia. The two of them had entered the Grown|Gathered idea in a local business competition back in the spring—which they didn’t win, but did receive helpful feedback from. And it motivated them to take the concrete steps of writing a financial statement, determining a target market, and making financial projections.

“We actually got to do it for the company we wanted to build,” Caroline says, drawing a contrast to her previous work doing the same thing for other companies. “Going through that process made me really grateful for my banking background.”

But even the appeal of working for herself wasn’t enough to make it easy to leave behind that comfortable—and rewarding—banking job. Caroline knew she needed to launch Grown|Gathered in the spring, at the beginning of flower season, but that meant forfeiting her annual bonus at Cascadia.

“I didn’t expect it to be so hard to quit.” Caroline says. “I thought, ‘What the heck, I’m going to leave all this?’”

Making the leap even harder, Caroline wanted to keep Grown|Gathered under wraps at first, so that she wouldn’t be influenced by unsolicited business advice from her Cascadia coworkers. She told them she was taking time off to buy a puppy and “figure things out.”

“They all just kind of assumed I’d been eating bonbons on the couch and watching Netflix since I quit,” Caroline laughs.

But her reality has been quite the opposite. She still gets up at the same time she did for her office job. And she still gets dressed every morning.

“I get up in the morning and I’m determined to put on pants,” she says. “I’m not going to be one of those pajama people. But instead of biking downtown to work, I’m just going to sit at my kitchen table and work.”

And Caroline has had a lot to work out: from building and optimizing the website, to obtaining the business license, to fine-tuning the product—let alone finding and retaining customers.

“There’s still a lot of panicking that goes on,” Caroline says. “I bought some flowers the other week that died really fast. One person emailed me and was like, ‘I’m not unsubscribing but these died really fast.’ Someone else unsubscribed.”

So Caroline started reading about vase life, the types of flowers that last longer, and things that can better condition the flowers for longevity. She bought an air conditioning unit for her house, and started storing the flowers in her closet to keep them cool.

“It’s definitely been just a crazy learning curve,” she says. “I think the scary thing is not having clear direction all the time. At (Cascadia) my bosses would say, ‘Go build this financial model,’ and I’d do it. But no one is telling me what to do now.”

“My initial thought was that we should do bike delivery because that’s very romantic,” Caroline says. “But Seattle is very hilly. Biking up those hills with fifty pounds of flowers on the back, even if I had a trailer . . . That’s just not reasonable.”

Luckily, Caroline has a car she can use for deliveries.

So far, Caroline and her business partner have been happy with the growth rate of Grown|Gathered.

“We have an idea of how many subscribers we need to support us. If we hit that number, that’s good. But what if, instead of paying ourselves, we hire an engineer to build us the capabilities on the website that we want? Or rent a space so we aren’t running this out of my kitchen?”

Caroline and her partner both carefully saved money over the last couple of years, so that they could devote themselves to Grown|Gathered without being too concerned about finances.

“To stop trying it would be hard,” Caroline admits. Now that she’s here, she’s fully committed. She believes in her product even when she feels doubts about her own abilities.

“No one is trying what we’re doing,” she says. “Having faith in the space we’re playing in, even when I don’t have faith in myself, has been personally challenging. Leaving a salary, and benefits, and a 401k, was scary for me and for my parents. But I’m being honest with myself about the satisfaction I want to feel in it . . . and if I don’t feel that, being ok with switching to something else.”

This article is part of a series profiling young Morehead-Cain Alumni entrepreneurs.