Ten years ago this summer, when she was a junior at Carolina, Hadley Heath Manning ’10 landed a research assistant internship at the Independent Women’s Forum (IWF) in Washington, D.C.

And it’s clear Hadley is good at what she does: In 2015, the Republican National Committee honored her as a “Rising Star.” In 2016, Forbes named her to its 30 Under 30 list in law and policy. 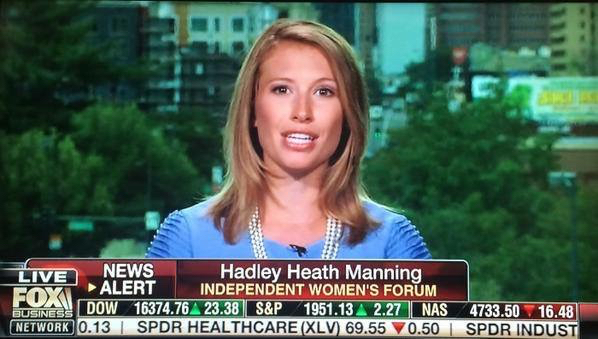 Hadley—who now lives in Denver, Colorado, with her family—says she loves being able to work for a cause she believes in. But she strives to be mindful about her role in the national discourse.

“During a time when the national conversation seems not just more contemptuous but also more cynical, I try my best to have a voice that is more positive and does not paint my political opposition as the enemy,” she says.

Hadley says this challenge is particularly front-of-mind when she speaks on broadcast television.

“It seems like that industry takes a real beating for coarsening the national conversation,” Hadley says. “I never want to contribute to that, so I think the challenge for anyone in that space is: How do I, in 30 seconds, say something that is meaningful and truthful and doesn’t resort to oversimplified talking points?”

Hadley says that, for her, an important part of that intentionality is staying open to hearing viewpoints that contradict with her own.

Hadley says she strives to read news from a variety of outlets, and she nurtures close personal relationships with people who disagree with her politics.

“One of the biggest threats to our politics in the U.S. today is that it’s very easy for people to become insulated,” she says. “If you have personal friendships with people who disagree with your politics, that’s good for you—and good for them, I hope.”
When it comes to increasing the number of women in politics, Hadley says one of the challenges for the Republican Party is that conservative women are more likely to be stay-at-home moms.

“My theory is they’re more likely to be family-oriented, which reduces the pool of people we’re talking about,” she says. But women can be politically active without running for public office.

“In general, women are more likely to vote than men,” Hadley says. “Women have a huge influence on which issues candidates talk about. Don’t discount women’s political influence based on the sheer number of women in political office.”

Hadley considers it a privilege to live in a country where women can choose to stay at home with their kids, or to work outside the home full-time.

“We (at IWF) believe that women are capable of making those choices and understanding those trade-offs,” Hadley says. “We feel empowered by that. Women get to choose.”

Hadley says she’s grateful that IWF allows her to work remotely and set her own hours. Despite her national honors and her frequent appearances in national news outlets, she says the greatest accomplishments in her life so far have not been professional—they’re her family. Hadley is married to a fellow Morehead-Cain, Aaron Manning ’10, and they have two young children, Madeline and Jack.